On March 9 2015, Gigaom ceased operations because of the insolvency of Giga Omni, the corporation behind the scenes. As part of that cessation of operations Gigaom Research also closed its doors, and the network of analysts, editors, researchers, and other staff — built over years — was disbanded in one day. Gigaom’s closure meant that ongoing research projects were halted, planned activities with clients cancelled, and all other operations were shut down.

In May, Austin-based Knowingly acquired some of the assets of Giga Omni, most notably Gigaom.com, which includes the content created by Gigaom Research. Note that Knowingly was not an investor in Giga Omni, and there is no relationship between Knowingly and those involved in the former Gigaom business aside from this transaction.

After reading about the sale, I contacted the CEO of Knowingly, Byron Reese, and determined that he intended to restart Gigaom Research as part of the relaunch of the Gigaom operation. And I am happy to say that after some weeks of discussions, I am now working closely with Byron to kickstart a new Gigaom Research, and to help grow a new research and analysis operation as part of his vision for the new Gigaom.

I asked him a few of the key questions that Gigaom Research’s clients and the greater community might want to know:

Stowe Boyd: How do you envision the charter of the new Gigaom Research, going forward?

Byron Reese: We think that good research is authoritative, accessible, and actionable.  Those are the guiding principles. Having said that, we would love to hear from the community about what they like and don’t like about the research we publish.

We are introducing a few new things.  One of which is a section called “Private Briefings”. Private Briefings are exclusive, in-depth interviews with some of the titans of the tech world, who will discuss the state of the industry and its direction.  You will see the first of these soon – a chat with a Nobel Laureate around biotech.

SB: You announced that you were going to relaunch Gigaom in August. Is that still the plan for the media side of the company? Obviously, we’ve relaunched Gigaom Research earlier than that.

BR: That is still the plan. I do think you will see some new content on the site before then. Very soon in fact.  But when we relaunch, the amount of new material on the site will be pretty small at first. We are committed to the highest bar of quality, and we are going  to take whatever time it takes to build an editorial department that lives up to that standard.

SB: Those companies and individuals that were subscribers under the old Gigaom Research did not get full value in many cases. What’s the plan going forward?

BR: Although all of our subscribers had ongoing access to the 10,000 piece research library, there was a four-month period when no research was produced.  As such, we are extending everyone’s membership by four months.  An email to that effect will go out shortly.

Of course, this is only the starting point of an open dialogue we hope to have about Gigaom Research and our plans moving forward. Much more to follow, including several initiatives unlike any that the old Gigaom Research undertook, and a much greater cross-pollination across the various elements of the new Gigaom.

On a personal level, I had worked for over four years at the old Gigaom Research, starting as an occasional contributor, writing a report here and there. But in late 2012 I become a Research Lead, becoming the principal contributor to the Social channel, which morphed into the research area of the future of work and work technologies.

I agree with much of the criticism about the business model at Gigaom, a company that relied too much on venture funding, and not enough on organic growth. Danny Sullivan’s analysis was spot on. By extension, Gigaom Research might be painted with the same brush. I agree that the operating model set up by Giga Omni was too top heavy, and potential synergies between the news and research sides of the company were not exploited.

At the same time, at Gigaom Research we were doing a great many things right, as I wrote in late May (see What was working at Gigaom Research). Last year, Duncan Chapple wrote about some results in research that KEA conducted on influence among analyst firms, and which showed how Gigaom Research’s profile was growing very quickly. 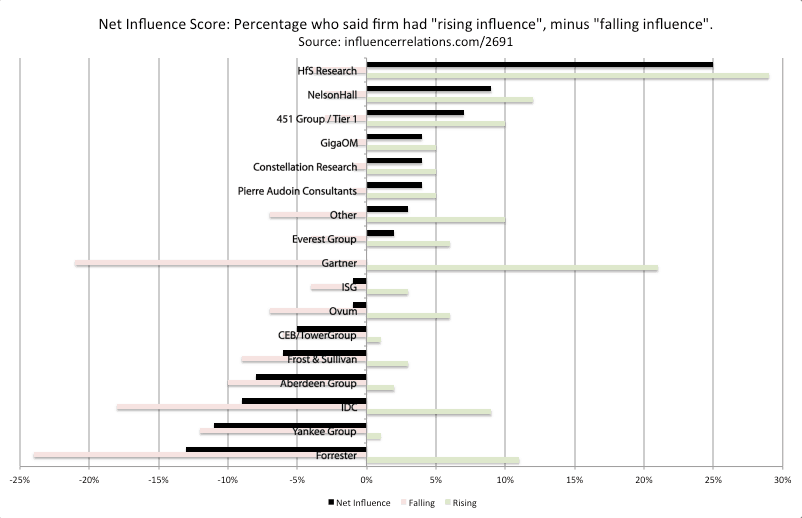 In the weeks following the shutdown in March, I contacted many of my Gigaom Research clients, and discovered a great deal about their perceptions of the old Gigaom Research, much of it positive, and some critical feedback, as well.

Our plan is to retain those elements of the old Gigaom Research that our clients found immensely valuable, which propelled that growth in influence: most especially the high quality of research and analysis drawn from that network of independent analysts. At the same time, we now intend to shift to a much more agile and innovative operating model: leaner and smarter. As Research Director, I will be working with Byron to grow the business organically, and we will be bringing on other contributors — some familiar names and many new ones — in the weeks and months to follow.

If you have any questions or concerns, please contact me.

The diversity of the data ecosystem within modern enterprises is one of the most difficult aspects of managing data today. Companies struggle…

5G is creating a new service economy. From its headquarters in Victoria, Canada, InDro Robotics has created a drones-as-a-service business model. 5G…