IBM has pledged to deliver a $7 billion cloud business by 2015 for a couple of years — and now, according to its own numbers, it’s achieved that goal. On its fourth quarter 2014 earnings call, IBM CFO Martin Schroeter said — a couple of times actually — that this key strategic business grew 60 percent last year to hit that $7 billion goal.

But, that number is hazy. It is unclear how much of that business comes from older outsourcing deals that are being reconstituted as cloud business. On the other hand, nearly every vendor trots out nebulous numbers when it comes to cloud. As has been reported ad nauseam, [company]Amazon[/company] doesn’t break out the size of its AWS cloud business. There’s also been controversy over Microsoft’s cloud claims.

Having said that, a claim by one [company]IBM[/company] insider that this $7 billion figure makes [company]IBM[/company] the world’s largest cloud provider has to be taken with a big grain of salt. Over the past four quarters, the same category in which AWS resides logged $4.8 billion in sales, and I have to say the idea that IBM has a bigger cloud business than AWS begs disbelief probably everywhere except in IBM’s Armonk, New York headquarters.

Overall, IBM logged fourth-quarter earnings of $5.81 per share, down 11 percent from $6.13 for the year-ago period. Net income was off 13 percent to $24.11 billion from $27.70 billion for the same period. IBM shares, which initially soared to nearly $163 on the earnings news, then swooned as people dug through the numbers and IBM provided a disappointing outlook. 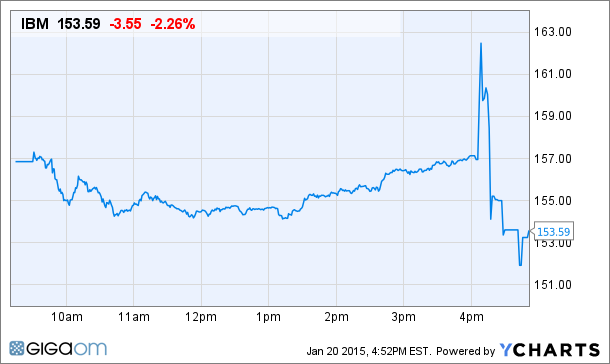 IBM logged $25 billion in revenue from those combined segments, which he said now accounts for 27 percent of IBM’s total business. And, he noted that IBM’s “as a service” business (meaning IaaS, Paas and SaaS etc) is now purring along at a $3.5 billion run rate up from $2.2 billion last year.

In that segment its OpenStack-based Bluemix PaaS and SoftLayer cloud infrastructure businesses are key.

This story of doing well in high-value segments echoed what SAP CEO Bill McDermott, said earlier Tuesday: that SAP’s core (legacy) business is growing but that cloud is growing faster. The question for both these companies is whether growth in new businesses can make up for the dwindling of their bread-and-butter legacy stuff.

Speaking of SoftLayer, Lance Crosby, who retained his CEO title when SoftLayer was acquired by IBM two years ago for $2.2 billion, is now general manager of cloud innovation and business development at IBM. Meanwhile Robert LeBlanc, who joined IBM in 1981, is now the official cloud guy, aka SVP of Cloud  — so those hoping for an outsider perspective to guide IBM’s cloud may be disappointed.

Whether you are looking for a voice solution or a complete unified communications (UC) platform, verbal communication is a critical requirement. Unified…

This report focuses on real-time data and how autonomous systems can be fed at scale reliably. To shed light on this challenge,…