Sometimes it doesn’t take a brand new vision to get investors excited about a company again.

Groupon appointed the company’s co-founder and interim CEO Eric Lefkofsky as the new permanent CEO on Wednesday, and the company’s stock has been on the rise since then. It was up 20 percent on Thursday.

Groupon announced earnings that narrowly beat the street on Wednesday, and that combined with Lefkofsky’s appointment and the announcement of a $300 million share buyback program have all had an impact on investor confidence in Groupon. 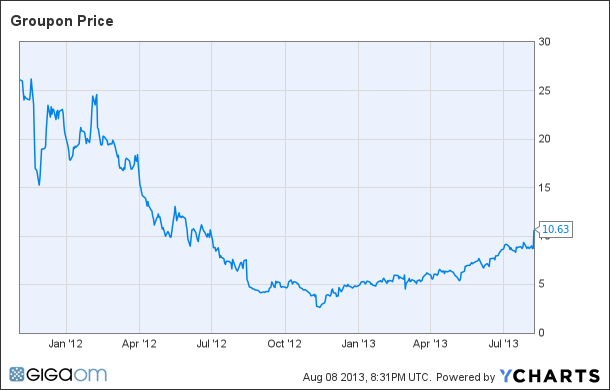 “We simply have too much to do in building out our business model to take on a transition at this point. As a result, the board has asked me to stay on as CEO, which I have agreed to do for the next few critical years,” Lefkofsky said on the company’s earnings call Wednesday.

Lefkofsky is the single largest shareholder for Groupon, the company he co-founded with former CEO Andrew Mason back in 2008. Mason’s dramatic departure back in February led to Lefkofsky’s appointment as interim CEO. (Mason has since surprised everyone by being totally serious in releasing a motivational business rock album, which NYMag’s Kevin Roose called “Raffi of Dot-Com Flameouts.”)

Groupon’s business is somewhat in flux right now, as it expands away from the kinds of email marketing deals that launched the company and that consumers quickly tired of. Instead, Groupon is expanding its relationships with large brands to build its Groupon Goods program, which is something like eBay or Costco, providing steep discounts on brand-name merchandise from home goods to electronics.

While the head of Groupon Goods departed in May, the unit is still growing, going from 37 percent year-over-year billings growth in the first quarter to 50 percent in the second quarter.