The commercial frenzy of Black Friday is done, but now it’s Cyber Monday, that possibly-fictitious phenomenon of the heaviest day of e-commerce spending online. We’ll see. So far, it looks like it will be a strong holiday season for online commerce, as comScore’s tracking shows spending up 16 percent, mildly outpacing Forrester’s forecast for 15 percent growth.

It’s a little early to get a clear reading on whether online is stealing holiday sales from the physical world. Brick and mortar retailers are trying to combat “showrooming” with price-matching and online-offline connections like in-store pickup. Walmart.com is aggressively promoting such tactics with TV advertising that extends Cyber Monday to a full “cyber week.” It’s easier to track online retail, so we may have to wait for earnings reports for confirmation of serious channel shift.

Even though online shopping and home broadband access are well established, shopping behavior continues to evolve. Mobile and social are this year’s buzzwords: mobile’s impact appears marginal but growing, but social commerce remains in serious flux.

Mobile price comparison is a very real phenomenon, but does it lead to direct transactions? And are single-merchant or -retailer apps an effective vehicle for buyer lock-in? According to IBM analytics, mobile accounted for 16 percent of Black Friday sales. But the leading “mobile” shopping platform is the iPad, which is a living room rather than pocket device. Meanwhile, some are interpreting that Amazon and eBay apps – coupled with showrooming – are doing damage not only to physical retailers but to Google as well, as shoppers rely less on the big search engine. Interpreting this as a major disruption in search is probably premature, but this potential trend bears watching.

Everybody’s down on social commerce, as defined by daily deals and flash sales. Well, not everybody. Hedge fund Tiger Global Management thinks Groupon is salvageable, and start-up Zulily, which offers deals for moms and kids, raised $85 million from Andreesen Horowitz. That’s in the face of Groupon’s flat growth, layoffs, and management turmoil, and Gilt Groupe’s strategy shifts while it searches for a new CEO.

But it’s not just the daily deals companies that have to prove the staying power of social commerce. Companies like Facebook, Twitter, and Pinterest also have to answer key questions to prove the validity of the category:

Is social commerce mainstream? The answer to this one is “almost.” Groupon is roughly the same age as Foursquare, and our GigaOM Research consumer survey data suggest daily deals usage is much more mainstream than local check-ins. Already, nearly half as many online adults visit daily deals and flash sales sites (30 percent) on a monthly basis as buy from online stores (64 percent) and 20 percent make regular purchases. Check-in is still a single-digit (6 percent) phenomenon. 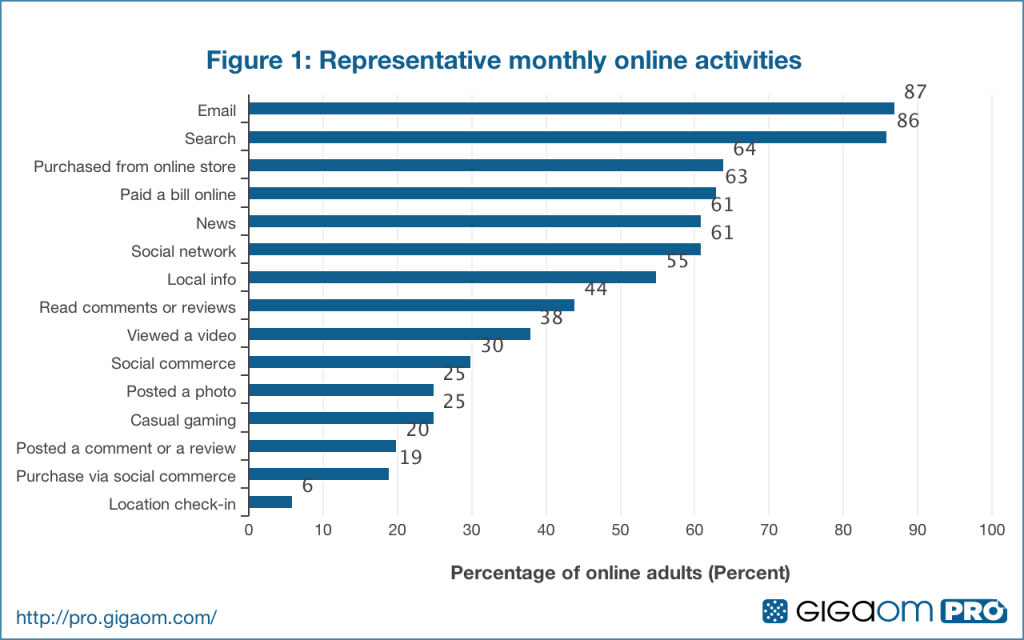 Is social commerce a new category? Unlike social gaming, social commerce does seem to be an original category. Zynga games aren’t really very social, and are used by the same audience that played earlier time-killing casual games like Bejewelled. What Zynga did was use Facebook for distribution. Groupon did, too, and admittedly, daily deals don’t depend on social sharing to get a certain volume of commitments before the deal goes live the way web 1.0 systems like Mercata worked. But reviews and recommendations give hints where Pinterest and Facebook stores could evolve.

Where does social commerce fit in the e-commerce ecosystem? That’s the big question. Twitter does not seem to be driving many real transactions yet, even though its interest graph might be more predictive of buying behavior than Facebook’s social graph. Gifting probably won’t be a billion-dollar business for Facebook anytime soon – retail margins are thin, and impulse purchase opportunities limited – but it makes logical use of friend connections and personal data. Social media, including so-called social shopping platforms, may end up being a better source of data for merchants and retailers than they are powerful transaction engines.

Where does social commerce fit in the online marketing ecosystem? See “data,” above. And regular readers are probably tired of my argument that Groupon should be a marketing rather than shopping platform. But I’ll make it one more time: Groupon could make better use of its saleforce and local merchant relationships by selling marketing services like display ads and paid search listings than it can selling them point-of sale systems.