At the GigaOM RoadMap conference, GigaOM Research hosted a Mapping Session on “Next-generation UIs: What comes after Siri?” We wanted to take the pulse of conference attendees on what they thought were the market forces driving user interface innovation, and whether post-Jobs Apple would remain at the forefront.

GigaOM Research analysts David Coleman and Lynn Langit started the session with some slides that showed examples highlighting some of the themes of the discussion. (Those slides are posted on Slideshare; the link is at the end of this post.)

Why does Siri disappoint?

The feed-based UIs common in social media applications like Facebook and Twitter have already made their mark on enterprise computing, Pinterest-style image maps are showing up everywhere,  and the latest “new new thing” is Apple’s Siri. Siri has been something of a bust – Apple overset expectations for a mobile personal concierge. The panelists concluded Siri was over-ambitious in its attempt to deliver a universal conversational UI. Siri is far more than voice input. It adds voice output, context-based search of multiple sources, and applications command.

Attempting to deliver a user experience that depended on solving multiple technology “grand challenge” problems (speech recognition, speech generation, contextual search) was just too much to ask, even for Apple. GigaOM analyst George Gilbert observed that trying to force that combination into handling all the various tasks Apple was promising, rather than taking a more pragmatic, structured approach (like Google’s info cards or IBM’s single-function models), is the main reason we haven’t seen a Siri API for third-party application integration yet.

We often use Mapping Sessions to lay the groundwork for deeper analysis on emerging markets where we apply our Sector RoadMap approach. We’ve done Sector RoadMap reports on categories like the Platform as a Service market and work media tools. Sector RoadMaps are collaborative research efforts that match up competitors’ abilities to align with what we call Disruption Vectors, i.e., the key technology or market forces that drive emerging markets. Smart vendors can ride Disruption Vectors to gains in revenue or market share. 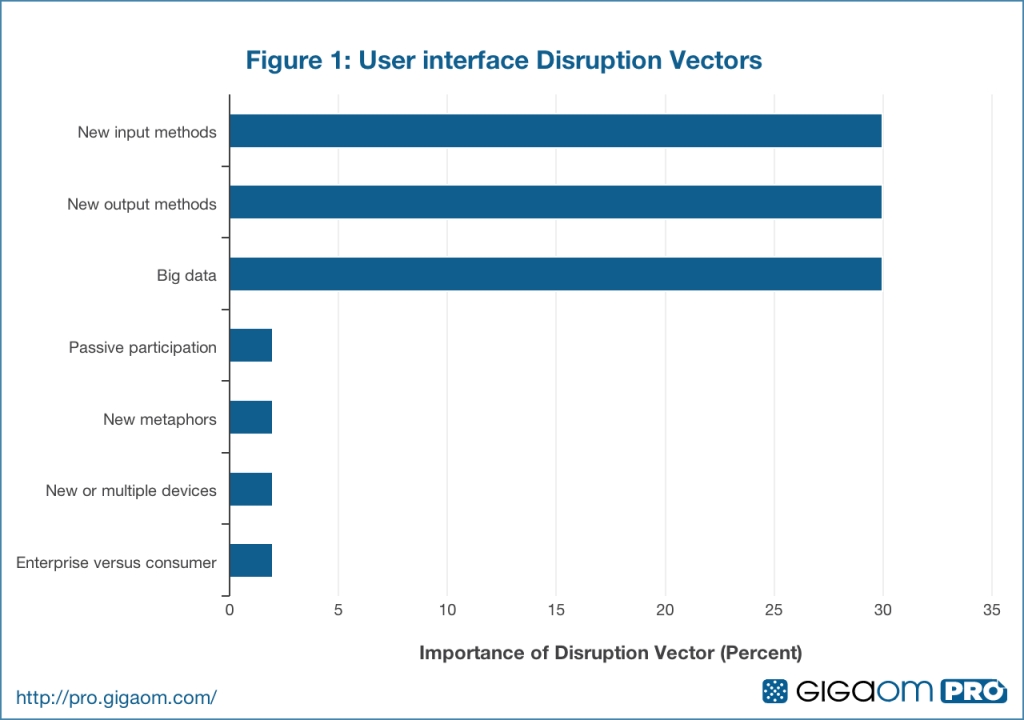 Siri’s failure to deliver on its promise led the Mapping Session participants towards the conclusion that we’ll be seeing UI innovation on an app by app, or task by task basis. We probably won’t see a single technology, approach, or metaphor apply broadly in different contexts such as enterprise applications, in-vehicle command and control systems, or home entertainment. That doesn’t bode well for Microsoft’s efforts to apply Windows 8 conventions across phone, desktop, tablet, and console. Similarly, the graphic above illustrates the consensus of the session participants as to the relative importance of Disruption Vectors in user interface innovation. Three different market forces seem to have equal weight, instead of a single dominating source.

Panelists and participants suggested other forces as potential UI Disruption Vectors, but none of them drove as much discussion. Automobiles aren’t the only place where passive participation while multitasking is a key factor in UI design. The file-and-folder metaphor is aging, and inappropriate for many entertainment or collaboration tasks, yet participants didn’t see timelines or other schemes as obvious successors. Session participants agreed that new devices and twin- or multi-screen applications are driving UI development, if not completely disrupting the space. And while there’s a tension between designing for business versus consumer functions, consumerized IT trends are already in play, and collaborative interfaces might be the bigger trend.

We welcome your feedback on these trends, and on what might accelerate the development of user interface technologies. Have we missed or mis-emphasized anything that you believe will be key to driving the sector over the next 12 to 24 months? Continue the discussion by leaving a comment below.

The slide deck we used to drive the conversation can be seen below, and it is available for download through SlideShare.