Facebook reported solid results for its third quarter. Its ad revenue growth outpaced Google’s, as I expected it would, and Facebook showed that it can make at least a little money off of its mobile users. The market (over)reacted favorably, just as it had over-expressed its concern. 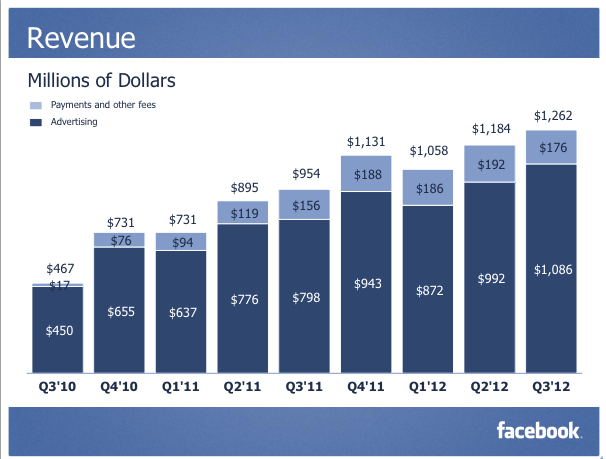 Ad sales were up 36 percent year over year, to $1.09 billion. Mobile advertising represented 14 percent of the total. Some observers think Facebook might even be able to command higher ad pricing for mobile than for its web advertising. Facebook is now probably the number two seller of mobile advertising, after Google. All that shows, really, is how immature mobile advertising is, and how search-dominated it’s likely to be for the near future. Facebook’s real money comes from its website, and it still needs to work on proving to brand advertisers that social media is effective.

And although Facebook’s payments revenue grew year over year, it is down sequentially. Nearly all of that comes from Facebook’s cut of virtual goods sold by social games. Zynga, Facebook’s biggest source of payments, is between hits, and struggling a bit.